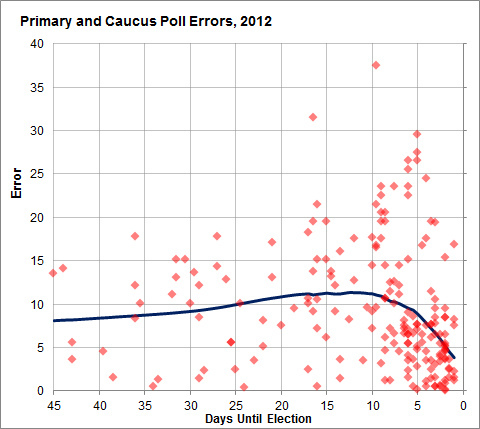 Nate Silver, who runs the excellent 538 blog at the New York Times, has produced a lengthy analysis overnight on the performance of polls in the current primary season.

His chart above tracks the error in the polls and compares it to the number of days in advance of the election that they were conducted. Nate calculates the error by looking at how much the polls missed the final margin between the top two candidates.

The challenge for the pollsters at every sort of election is that most voters don’t focus on what they will do until the final few days during which they face a barrage of communications from the contenders.

In this primary season we have seen dramatic surges at the last minute such as in Iowa when Santorum came out with 24% – his highest polling level was 18%.

Nate’s analysis is a timely reminder to punters especially ahead of “Super Tuesday” when ten states decide next week.

It also puts into context UK polling for the next general election which is due to take place 38 months from now.