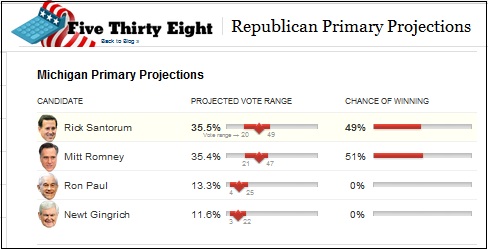 And Gingrich could be struggling in his home state

Above is the latest projection from Nate Silvers 538 blog at the New York Times and shows his latest projection for the crucial Michigan primary that takes place a week today. As can be seen he’s giving it to Romney by the smallest of margins.

A new Mitchell Research poll taken yesterday has Romney 2 points ahead. Just over a week ago the same pollster had Santorum with a 9% lead.

What seems to be making a huge difference here is that this is the state where Mitt was born and grew up and where his father won the governorship twice. According to the Mitchell poll 25% of voters say they are “more likely” to vote for Romney because of this – a finding that could explain why the betting favourite is not seeing such turnarounds in other states or, indeed, in national polls.

Meanwhile there’s a tight three-way battle going on in Georgia – which votes on “Super Tuesday” a fortnight today. Nate makes Romney the leader here but only by a whisker over Gingrich and Santorum. Georgia is, of course, Gingrich’s home state and it could be a fatal blow if he didn’t win.

One factor that’s worth noting is that Santorum has out-performed his poll ratings in all the states where he’s been in contention.