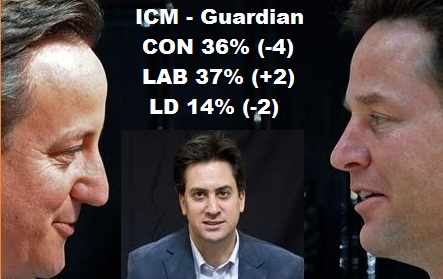 The first telephone poll of the month, ICM for the Guardian is out and sees the Tory five point lead of last month become a one point LAB lead tonight.

This follows a difficult period for the coalition particularly on the Lansley health bill. On that 52% say that the bill should be dropped with 33% saying the plans should be stuck to.

Whatever the apparent splits within the blue, reported by Tim Montgomerie at ConHome, are clearly not helping.

Other polls are expected this evening and this post will be up-dated.

So the direction of travel, if not the numbers, very much the same as ICM.