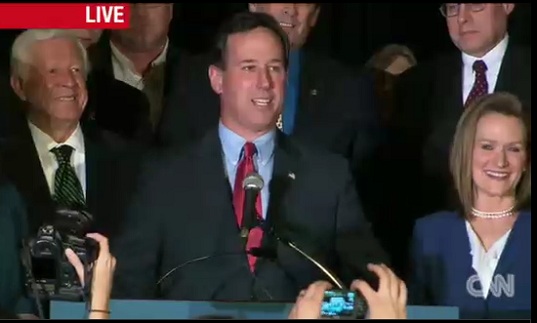 It’s been a dramatic, and for me enormously profitable, night in the US election campaign. Three states were up for grabs in GOP race and all three went to Rick Santorum.

Missouri, which had a non-binding primary, saw the former Pennsylvania senator come in with 55% of the vote to Romney’s 25%

Most sensational of all Colorado has been declared for Santorum. This was Romney’s second strongest state in 2008 when he chalked up more that 60% of the caucus votes and almost nobody even thought that he could be vulnerable. Overnight he got 35% of the caucus votes to Santorum’s 40%

Back in 2008 Romney had big victories in both Minnesota and Colorado.

So a great night for Santorum; something for the Paul supporters to cheer about but a dreadful time for Romney and Gingrich.

As I mentioned at in my header for last night’s thread I had laid Romney (that’s is bet that he wouldn’t do it) in Colorado at odds that give me one hundred times my stake money in winnings.

What is clear is that there’s very little enthusiasm for Romney amongst GOP supporters and turnout was down sharply in the area he did well in overnight.