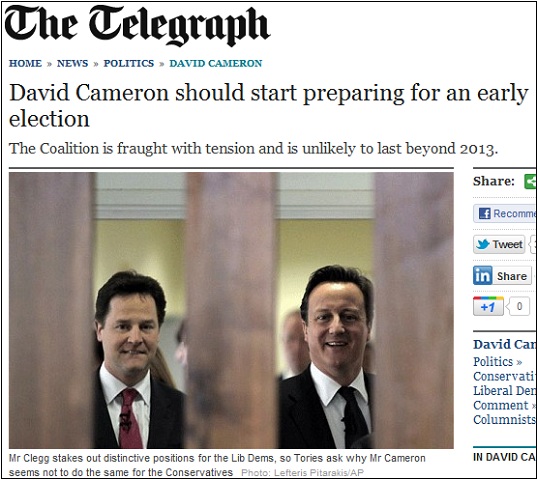 Getting the new boundaries is Dave/George’s biggest priority

Iain Martin has a provocative piece in the Sunday Telegraph in which he asserts that the coalition will break down next year and that Cameron should be preparing for an early election.

He argues that the Fixed Parliament Act, setting the date for May 2015, can be circumvented by a commons vote with a two thirds majority.

Nowhere in his piece does Martin refer to the boundary changes which, once agreed and implemented, make it that much easier for the Tories to win an overall majority. These are going through the consultation process at the moment and are due to be finalised for a commons vote by October 2013.

The overwhelming electoral priority of the Tories, surely, is to ensure that those changes go through in order to make the electoral playing field a little less biased towards Labour.

We all know what happened at the last two elections. In 2005 Tony Blair’s Labour was returned with a substantial working majority on just 35.2% of the UK vote. In 2010 Cameron’s Tories chalked up a 36.2% UK vote share and were 19 seats short of a majority.

If the Lib Dems got a whiff that the Tories were planning to break the coalition to try for an early election then the chances of the new electoral map getting through the commons would be nil.

Maybe the Tories could wait until after the vote and then go for an early election in 2014? That’s certainly possible and, no doubt, Labour could vote with the blues to circumvent the Fixed Parliament act. But what a gamble Cameron would be taking. For if he failed to win a majority it’d be a whole lot harder persuading other parties to join a coalition or even providing “supply and confidence” support.

Martin doesn’t like the compromises that the Tories are having to make within the coalition. Fair enough but it’s hard to see an early way out.