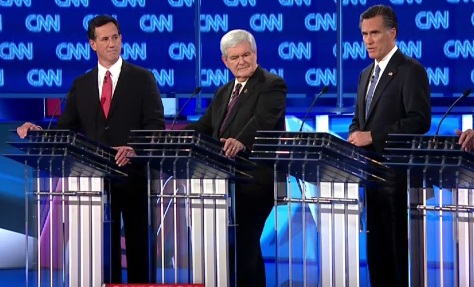 These were the reactions of Nate Silver, the prominent US election and polling analyst, to the final TV debate in Florida ahead of next Tuesday’s primary.

Could envision an outcome in Florida like Romney 45, Gingrich 25, Santorum 20,Paul 10

There’s little doubt that the big loser was last weekend’s winner in South Carolina, Newt Gingrich. This was his last real opportunity to edge back into the Florida race and he flunked it. He appeared inadequate, mean-minded and somehow out of his depth. It’s hard now to envisage him staying the course.

It was left to the victor of Iowa, Rick Santorum, to take on the Romney band-wagon and he didn’t miss his opportunity. He landed a number of blows and he was the only one to seriously worry the ex-governor of Massachusetts.

Could he now get the polling bounce and take over the mantle as the “Anyone But Mitt” (ABM) choice? The latest polling has him in the 8-12% range so Nate’s prediction of 20% is quite a big jump.