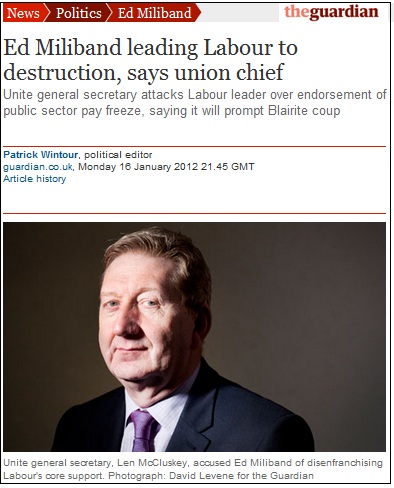 Where’s the infighting going to end?

The main front-page story in the Guardian is an attack by UNITE boss, Len McCluskey, on the way that the Two Eds are running the party. He also talks of the possibility of a “Blairite coup”.

This is from Patrick Wintour’s report:-

“…The Labour party’s chief union backer has accused Ed Miliband of undermining his own leadership, disenfranchising the party’s core support and leaving the country with all three main parties bent on using austerity to save capitalism.

In an article in the Guardian, the Unite general secretary, Len McCluskey, launches a strident attack on Miliband and Ed Balls, the shadow chancellor, prompted by the party leadership’s weekend decision to endorse a continuation of the government’s public-sector pay freeze.

He suggests that their stance “challenges the whole course Ed Miliband has set for the party, and perhaps his leadership itself”. He also claims Blairites will seek to capitalise on their policy coup and come for Miliband himself, a path he says “will lead to the destruction of the Labour party as constituted and certain election defeat”…

Strong stuff especially as it was UNITE alongside the GMB and UNISON which, arguably, stopped David Miliband getting the leadership in September 2011 and instead did everything in their power to ensure that Ed was the victor.

It’s not clear where this is going to go but it is significant, I’d suggest, that rather than this being a battle conducted in private McCluskey has gone public.

Clearly this has been prompted by the Balls U-turn on spending cuts.

I think there might be value in the Ladbrokes bet that Ed Miliband won’t surive 2012 as leader. That’s at 3/1.