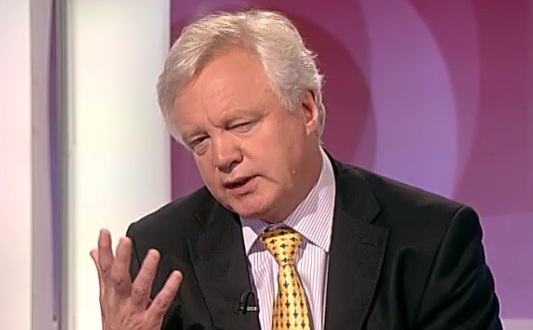 A LAB man writes about his favourite Tory

Thanks to Gwynfa for offering the â€˜Christmas Armisticeâ€™ challenge of writing about my favourite Conservative MP. I have been assured by Our Genial Host that this will be reciprocated. One stands out for me above all others.

There are plenty of things I admire about the Member of Parliament for Haltemprice and Howden, the Rt. Hon. David Davis MP. In stark contrast to the manicured, coiffed and pink-cheeked Cameron, Davis has lived – with a face to prove it. David brings substantial business experience from his time at Tate and Lyle. None of this public relations or special advisor flannel on his CV. Real work for a real manufacturer. While Cameron and Boris were throwing buns across the refectory or running out of restaurants with braying brats at university, Davis was serving his country through the SAS regiment of the Territorials.

David is the product of a modest background who took advantage of a Grammar School education. (And Labour leaders searching for a Clause 4 moment should be committing to expand grammar schools.) Like Alan Johnson, David Davis does not hawk around his background as a vote-winning emblem â€“ though his ability to empathise and understand those that current leadership is clearly a huge asset and untapped resource for a party led by minor aristocracy and inherited wealth.

In 2003 Davis helped unite the Conservative Party by not standing against Michael Howard as part of the coronation following Duncan-Smithâ€™s ill-fated leadership. David had a strong claim and reasonable set of numbers by all accounts. I dare say he was assured his time would come but he must have done there was a chance that it would not. He took one for the team and allowed the party to make inroads in 2005 and win the most votes in England when previously the party was on a life support machine under IDS.

Had the subsequent 2005 leadership contest against Cameron been run on first past the post principles (so beloved by Conservatives) then Davis would be Conservative leader now and likely Prime Minister.

Instead his role as Shadow Home Secretary has left a lasting mark. His defence of civil liberties was important and left Labour hideously exposed. It desperately needed doing and now all three major parties are in better shape for it. While many Westminster insiders were befuddled by his by-election in 2008, ask yourself this – can you ever imagine Cameron or Osborne ever resigning on an issue of principle? Me neither. Just as I canâ€™t ever imagine David Davis employing Andy Coulson or spending his Boxing Day with Rebekah Brookes.

I am of the view that a David Davis-led Conservative Party would be much more appealing to voters in the North where Cameron failed to win sufficient additional constituencies. Itâ€™s not that Davis is synonymous with being Northern but that his straightforward and down to Earth style resonates. I believe his appeal could have delivered a small but sufficient majority against Gordon Brown and would be a robust Conservative Prime Minister of substance.

As a Labour man I always want to see my team do as well as possible and I will vote red come hell or high water. Thereâ€™s a wider point. Tony Benn used to talk of two types of politicians â€“ signposts and weathervanes. Thatâ€™s one thing I agreed with him on. Davis knows what he believes and is direct in making his case. In a world of focus groups and opinion polls politics needs some more â€˜signpostsâ€™. Forget the Conservative Party, British politics would be stronger if he played a bigger role in the future. I am therefore happy to give David Davis my Labour â€˜armisticeâ€™ nomination, quietly hoping from a partisan view it proves to be a kiss of death.