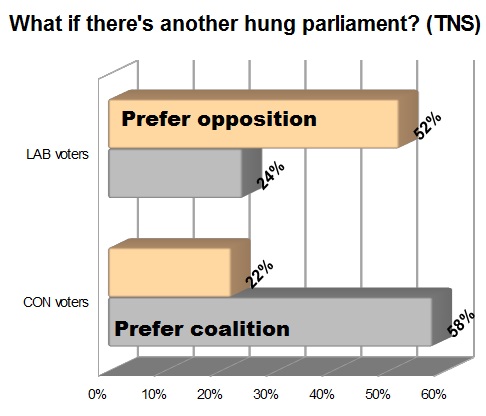 Would Ed Miliband go along with that?

A new poll by TNS-BMRB has come up with what seem to be remarkable figures about the view of Labour voters towards a hung parliament.

Over half said that they would rather go into opposition than form a coalition government with either of the other parties. This was, as can be seen from the chart, more than twice the number who would be happy to see a coalition.

If Labour do fall short of the overall majority target then surely they would do anything to find a way of getting back into government. Limited power is far far better than no power at all.

In contrast to this only around one in five Conservative supporters would prefer opposition to coalition and nearly three in five are happy to be in coalition.

The poll found that 23% of Lib Dems would prefer a coalition with Labour while 29% would opt for the Tories. 19% say they’d prefer not to go into government but be in opposition.

On voting intention the poll shows that Labour on 37& retain a 1 point lead over the Conservatives at 36%, but their lead has fallen significantly since last month. The Lib Dems are on 11% and other parties at 16%.

Getting the best out of Disqus

Do this by toggling between “newest” and “oldest” comments first.

If you refresh the page in the conventional way it breaks your connection to Disqus which can slow things up considerably depending on how much traffic Disqus overall, not just PB, is handling.