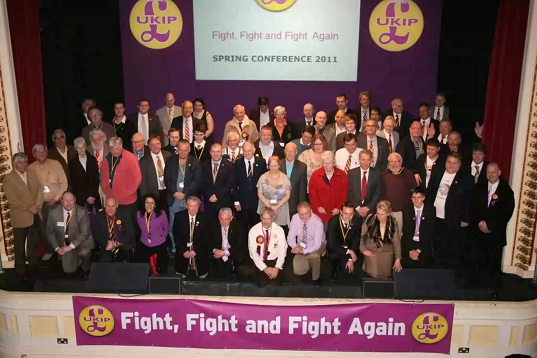 Surely this should be the moment for a party of the right?

You probable haven’t noticed it but the party that came second in terms of votes in the last national election but one, UKIP, is starting its annual conference in Eastbourne today.

That election, for the EU parliament in June 2009 was something of a high point and since then they’ve really struggled. Their hopes of a Westminster seat at the general election were dashed when Nigel Farage came a disappointing third in Buckingham in spite of the fact that none of the main parties were fielding candidates against the speaker.

At this May’s local elections the party barely won only a dozen or so council seats and shortly afterwards the former leadership contender, David Campbell-Bannerman, announced that he was defecting to the Conservatives. His reasons were damning:-

UKIP had become â€œobsessed with single issue politics, internal fighting and shouting from the sidelinesâ€¦With the recent failings in domestic elections, the ditching of policies and the lack of any credible plan, UKIP has confirmed it is not a serious, credible, fully-fledged political party but merely a pressure groupâ€

The last three telephone polls – from ICM, MORI and ComRes – have had the party at either 1 or 2%.

Over the past few months, as the Euro-zone crisis has been mounting, UKIP appears to have had nothing to say whatsoever.

I put it down to having the wrong leader. They need someone who is a credible national figure who is highly articulate, lucid and capable of putting forward a compelling case.

There is someone sitting in the wings who would be ideal. I’ve mentioned him before – the former Mrs. Thatcher aide and now a leading international opponent of the climate change lobby, Viscount Christopher Monckton. He’s about the only person who can put UKIP back on the map.