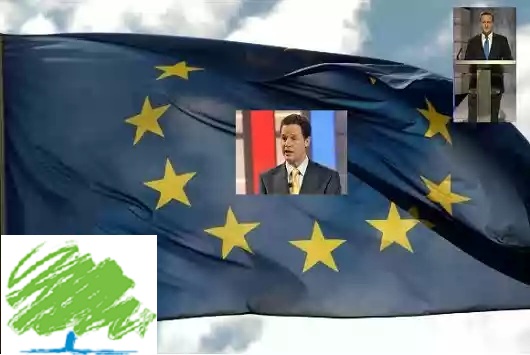 Or is he being constrained by Nick & the Lib Dems?

Several observers are reporting that there’s increasing concern amongst Tory MPs about Dave’s position on Europe. His detractors want a more eurosceptic approach which is very different from what they are hearing from their leader.

Daniel Knowles in the Telegraph reports on the feelings of many Tory backbenchers: “… For many, Europe has taken on significance as a test of the power of Parliament. Though they bang the desks loudly at meetings of the 1922 committee, this crop of Tory MPs feel little sympathy for a leadership which failed to win an election against the least popular Prime Minister in history. With little chance of promotion, many Tories prefer to act like they are in opposition, attacking the Government for failing to do largely impossible things. Europe goes to the heart of the concerns of the Right. It prevents the Government tackling immigration, limits the scope for supply side reform and costs a fortune. It is, in short, the perfect issue to rebel over. No wonder Mr Cameron finds it so frustrating. But he needs to give up the pithy remarks and make his case, because this debate is not going to fade away.”

In many ways it would be easy for Dave to blame it all on the coalition and the need to keep Clegg and his colleagues on side. But he’s not doing that and is being much more emphatic about his own position. Yesterday at PMQs he slapped down one of his back-benches who pressed him.

In the end, of course, Cameron’s the incumbent and it’s hard to see his position being undermined. The only worry for him could be if other events make him appear vulnerable and he might not find the party support there that he might have hoped for.