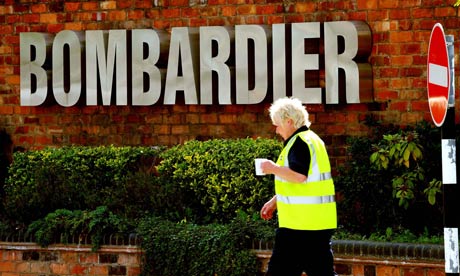 At the general election in May 2010 the East Midlands was one of the most crucial CON-LAB battle-grounds. Of the 46 seats at stake more than a quarter were gained by the Tories – It went from a pre-election notional split of CON 19: LAB 26: LD 1 to CON 31 and LAB 15.

However the boundary changes work out it’s clear that this will be a keenly contested region once again where the blues need to hold on to all their gains and get more if they are to secure a majority. The Lib Dems are traditionally weak here so the confrontation is almost a straight BLUE-RED.

There’s a new poll out in Daily Mirror this morning by Survation covering the two seats thought to be most hit by last month’s decision to favour Siemens in German rather than Derby’s Bombardier or the next big rail contact – building a new fleet of trains for the Thameslink route.

Two days after the announcement the firm said that 1,200 jobs would be lost. On top of this there is the knock on effect amongst a network of local suppliers.

The poll shows the following vote shares with comparisons on the general election.

Constituency polling is notoriously difficult and the samples were very small – but even taking that into account this points to a disproportionate move from the Tories and Lib Dems to Labour. Whether this is down to Bombardier we do not really know but it looks likely, This has been dominating the local media for weeks.

The general election, of course, is more than three and a half years off and so much can happen in the meantime.

The non-VI questions were very much as you would expect – you can find the full poll details here.