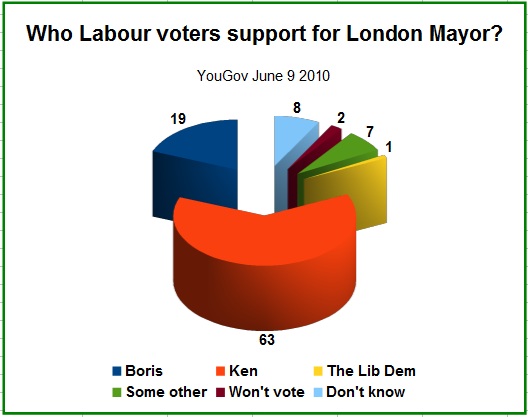 Could another candidate exploit the incumbent’s weaknesses?

Perhaps the first election where we’ll the first impact of the riots will be that for London Mayor in May.

The Tory incumbent, Mr. Johnson, looked far from sure-footed on his first day back after his truncated holiday and got booed at several locations when visiting the riot scenes.

This has been the worst break-down in public order in living memory and there might be more to come. Boris’s failure to get back from his holiday as soon as this blew up is likely to be remembered and could cost him.

Fortunately for the blues Ken has hardly covered himself in glory in his reactions and he still carries a lot of baggage from the two terms he served from 2000 to 2008.

Would Labour do better with someone else – perhaps John Cruddas the Dagenham MP who did so well when he ran for deputy leader in 2007?

The above chart is from YouGov data in the latest London mayoral election poll. The split in the pie chart shows what general election Labour voters say they’ll do next May.

As can be seen Ken gets fewer than two in three of them and that, as the saying goes, is less than optimal.