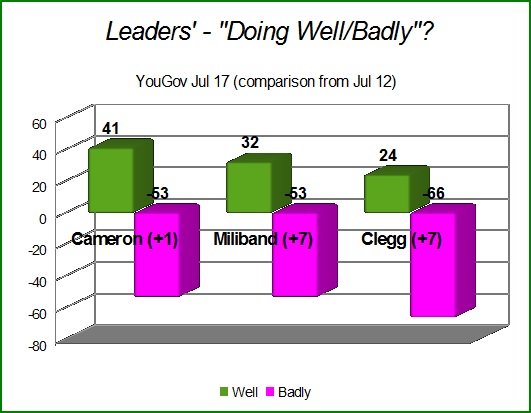 But are the changes just temporary?

The weekly YouGov leader ratings for the Sunday Times are just out and show sizeable moves upwards in their net positions for both Miliband and Clegg. Cameron, meanwhile, also moves up a point.

In the same poll a fortnight ago before the hacking scandal erupted Miliband was on 26% “well” and 60% “badly” – the worst figures of his time as leader. Today’s numbers show a net improvement over the two weeks of thirteen points.

Clegg’s net numbers today of minus 42 are his best figures for more than three months.

What we’ve seen this weekend is all the polls pointing in the same direction on the leadership ratings which, historically are a better guide to electoral outcomes than voting intention polling.

To question of how the leaders have handled the scandal Miliband is on 49% well to 28% badly; Cameron 36% well to 48% badly.

So Ed has had a good fortnight – the question is whether he’ll be able to sustain it.