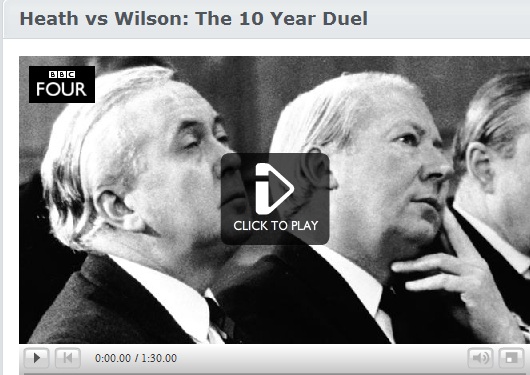 The documentary you cannot miss

One of the great “must-watch” political documentaries of recent times was the on BBC4 channel on Wednesday night on the mighty tussle between two grammar school boys who went to Oxford and fought four general elections against other.

Two of those elections were pivotal – 1970 when against all the odds and polling Heath won a majority and February 1974 when the Tories went to the country in the middle of the miners’ strike in the aftermath of the the 1973 oil crisis. They won most votes but were behind on seats and Harold Wilson returned to Number 10.

June 1970 was the first election that I voted in and the first I covered as a professional journalist. Labour being re-elected seemed a foregone conclusion and Heath’s victory was the biggest political shock of my life-time.

Looking at what’s happened since that February ’74 election marked the end of two party politics.

The programme deals extremely well with both elections and the most revealing story to me was how Harold Wilson scuppered a deal to end the 1973-74 miners’ strike thus paving the way for the Tory election defeat.

As the programme blurb states of Heath and Wilson “… together they presided over a decade that redefined the nation: Britain ceased to be a world power and entered Europe; the postwar consensus in which they both believed was destroyed; Thatcherism and New Labour were born. The country they left behind was unrecognisable from the one they had inherited – and the one they had promised.”

So many of the themes seen in the 90 minute programme are contemporary and have a relevance today. It’s really worth watching. It’s available on BBC IPlayer< ;/a> for another five days.