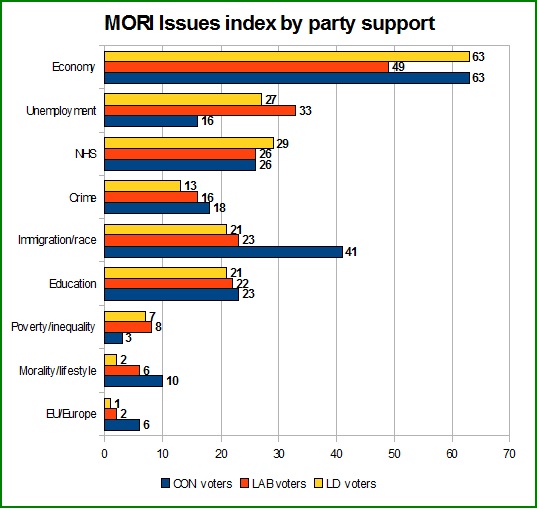 The above chart has been prepared from data in the May Ipsos-MORI issues index and seeks to break-down the responses by party support.

Interviewees are asked without any prompting to name the most important issue they believe is facing the country and also to name as many other issues as they would like.

As can be seen Tories and Lib Dems are giving equal prominence to the economy while Labour voters are are bit behind. A split, however, occurs with unemployment with the blues giving it a much lower rating than those backing the other two parties.

There’s a striking division on immigration and race with Tories being much more concerned than Labour or LD backers.

Crime, education and the NHS see broadly similar levels of concern amongst supporters of all three parties. On Europe/EU 6% of Tories raised it as a concern with just one percent of Lib Dems doing the same.

I find the concerns about crime in particular to be much lower than I would have expected while the size of the immigration split is very striking.