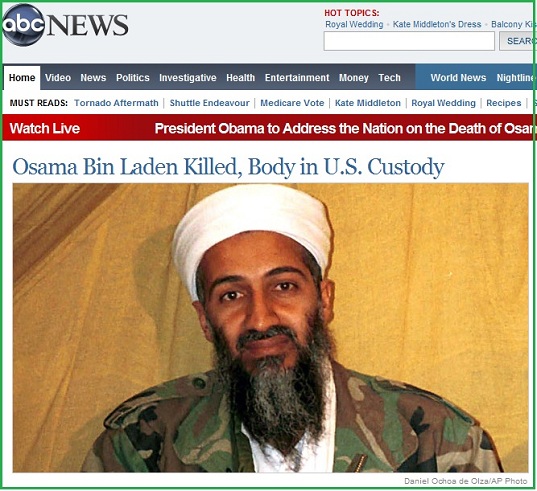 Nine years, seven months and twenty one days after the 9/11 attacks on the Twin Towers and the the Pentagon the US networks are reporting that Osama Bin Laden has been killed at a compound in Pakistan in a joint CIA/Special forces operation. According to ABC News quoting a national security source:

“… a compound in Pakistan where the terror mastermind was believed to be had been monitored for months. When the decision was made to move on it, special operations forces were sent across the border from Afghanistan to launch a ground attack and take the body.

This is a massive development and will surely be a big feather in Barack Obama’s cap as he prepares to seek re-election in next year’s White House Race.

What I think’s important is that this came not by accident but as part of a US operation which, no doubt, was authorised by the President.

It’s also likely to overwhelm almost other news in the UK in the final three days of the May 5th election campaign.

There are so many different dimensions to the story including relations with Pakistan which was visited by David Cameron only a few weeks ago.