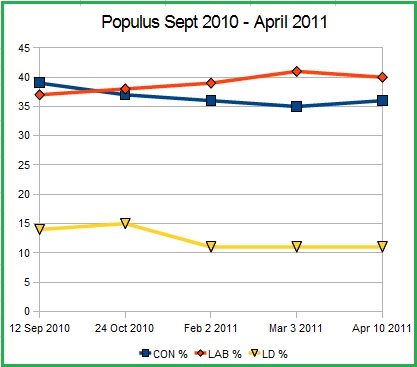 Why are phone polls showing a different picture?

Overnight we had what is increasingly a rare event – a Westminster voting intention poll that was carried out by telephone in this case Populus for the Times. The shares are CON 36: LAB 40: LD 11.

As the former head of polling at ICM, Nick Sparrow, was observing in his April PB polling column the phone pollsters are showing something of a different picture of opinion from the online firms which now so dominate the scene,

At the general election last May Populus was right at the top of the accuracy table alongside phone polls from ICM and Ipsos-MORI – so when we get such a poll it is something a of a treat.

Populus, like ICM, has a mechanism to deal with the significant group of those sampled who say they will be voting but won’t indicate which party. The firm’s formula is much less friendly to the Lib Dems than ICM but operates on the same basis with the Tories and Labour.

This latest poll will come as something of a relief to both coalition partners – both of which had a terrible few days in the period leading up to the start of fieldwork last Friday.

ICM and MORI are due next week.