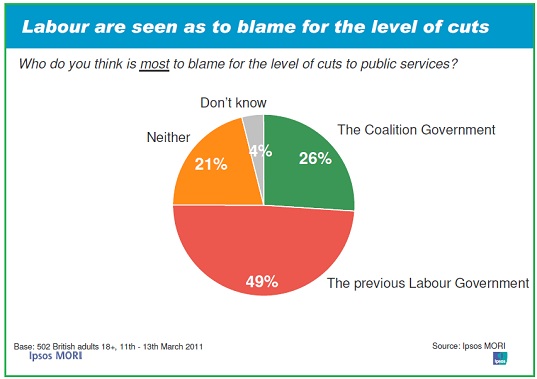 How key is this to the next general election?

If you think that there’s a glut of polling from Ipsos-MORI polling at the moment you are right. For as well as the regular MORI political monitor for Reuters there were also special pre-budget questions for the Economist – details of which are now available.

The most significant findings politically related to that subject that we’ve touched on a fair bit on PB – who is to blame for the cuts? MORI examined this by splitting the sample in half and asking different questions to each.

The first was broadly similar to that which we see every fortnight in YouGov’s tracker. Those findings are above and show nearly half the sample (49%) putting putting the blame on the last Labour government. The coalition was blamed by 26% which is almost the same as we saw in last week’s YouGov tracker.

To the other half of the sample MORI asked precisely the same question but extended the range of options to include the “banks”, the “state of the global economy”, and “local councils”. 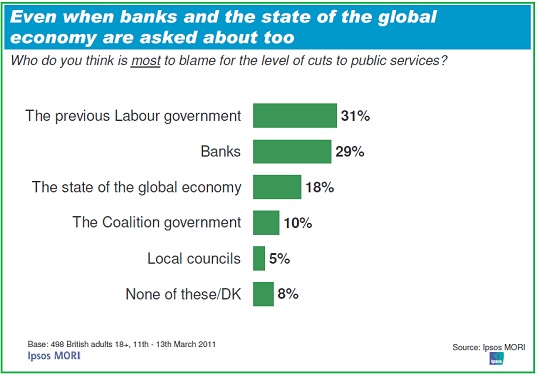 As can be seen the last Labour government with 31% came top again just ahead of the banks on 29%. The global economy was named by 18% with just one in ten of the sample blaming the coalition.

The MORI poll was carried out on the phone unlike YouGov which is, of course, online.

The fact that the same big picture emerges from a pollster using a very different methodology should be very worrying for Ed Miliband and his team. For whenever they criticise the coalition they’ll continue, rightly or wrongly, to get their record flung back at them.

As long as the “Labour’s to blame” mantra continues to resonate then coalition ministers will use it. Perceptions like this can be very difficult to shake off – after all Labour continues to get mileage out of invoking the name of “Thatcher” more than two decades after she stopped being PM.