The monthly telephone poll from Ipsos-MORI for Reuters is just out and reports good news for the Tories at the expense of both the Lib Dems and Labour. As is usual the pollster’s headline figures are restricted to those certain to vote.

Although the firm does not weight by past vote it does filter by the work sector of those sampled. So in this latest survey almost exactly one quarter of those interviewed were public sector workers and their views were scaled back by more than half. Without this adjustment Labour would have had a much bigger lead. The public sector worker split was: CON 25%: LAB 52%: LD 12%.

A key measure in the monthly MORI survey is on economic optimism. Here 51% think that the economic condition of the country will get worse over the next twelve months against just 23 who think think it will get better. Reuters reports that two in three people (60%) now believe that the economy will take at least three years to return to where it was before the recession.

The monthly MORI poll also has its regular leader approval ratings which have been asked in the same form now for a third of a century and are the numbers most used by political analysts. These are the latest numbers and trends:- 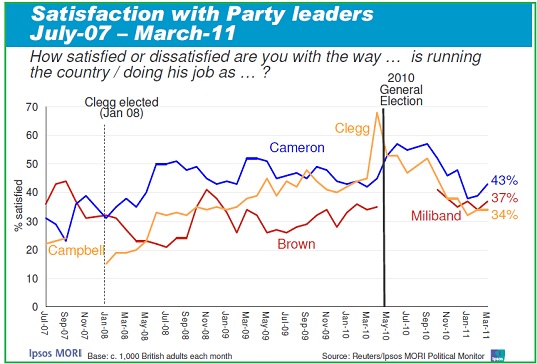 Surprisingly, given it’s only six weeks away, the poll did not include an AV referendum question.