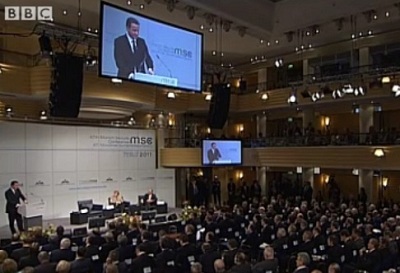 Was he right to say Dave was “writing propaganda for the EDL”?

The big ongoing row this weekend has been Cameron’s speech in Munich in which he’s attacked “state multiculturalism” in his first major statement as PM on the causes of terrorism. The UK, he argued, needed a stronger national identity to prevent groups turning to extremism.

In one controversial passage on how Muslim civil organisations should be judged Cameron asked: “Do they believe in universal human rights – including for women and people of other faiths? Do they believe in equality of all before the law? Do they believe in democracy and the right of people to elect their own government? Do they encourage integration or separatism?”

This is a tricky area and one that political leaders of all colours should enter with the greatest possible care. The most strong Labour response has come from EdM’s campaign manager and now shadow justice secretary, Sadiq Khan. He’s accused has accused the PM of “writing propaganda for the EDL“.

That is really stepping up the ante and has led to a fierce demand from Baroness Warsi that Khan should apologise.

The effect of the Khan move and the Warsi response has been to put more focus on what Cameron’s been saying. But was he right to attack the speech in the form he did? Was it over the top and which side of this argument does EdM want Labour to be on?