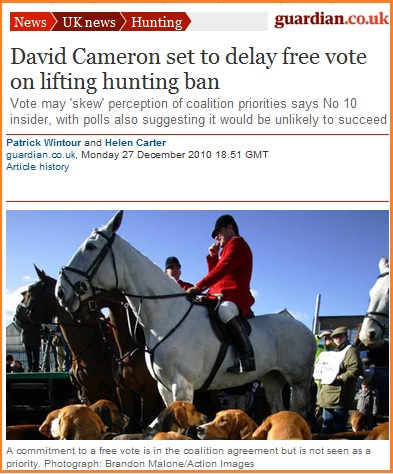 Is it all about the questions you ask?

With David Cameron said to be planning to defer the promised free vote on the anti-hunting legislation there’s news of two opinion polls from leading pollsters which the rival lobbying groups have issued to support their cases.

Thanks to JonathanD on the previous thread for spotting this:-

He wrote: “A survey by Ipsos-Mori for the League Against Cruel Sports released on Boxing Day showed that 76% of the British public think fox hunting should remain illegalâ€¦

The Countryside Alliance has produced a poll of more than 1,000 people, carried out by ORB, showing two-thirds of people agree that the hunting ban and the time spent enforcing was not a good use of police resources.â€

Both pollsters, MORI and ORB, are members of the British Polling Council

So we have two sets of findings demonstrating yet again that the wording of polling questions is critical – for it is not being inconsistent to agree with the propositions from both the League Against Cruel Sporty and the Countryside Alliance.

It’s also a good reminder to be ultra-careful when dealing with privately-funded polling.

This all comes down to what we’ve seen many times before – that people might tell pollsters that they are for something but when push comes to shove it doesn’t matter to them that much.