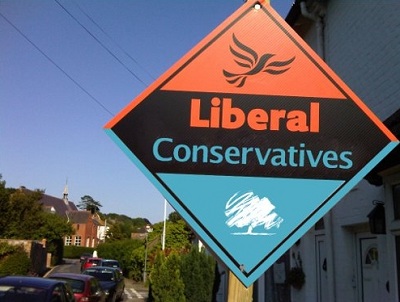 A big question hanging over politics is the possibility of a formal Lib Dem Conservative pact at the next general election. How likely do we think it is? Whether you are a political punter or involved in politics, until this question is resolved, it is impossible to make any long term predictions.

Senior Conservatives have certainly been flirting with the idea in public. To date Nick Boles MP has been the ringleader. In his recent book â€œWhich Wayâ€™s Upâ€ he called on Cameron and Clegg to form an alliance. What make this interesting is that Boles is known to be close to Cameron. Former Prime Minister John Major also recently called on the coalition leaders to work more closely. Neither story was rejected by Downing Street. It is reasonable to assume that this kite flying has the endorsement of David Cameron.

The Lib Dems are much cooler on the pact (at least in public). As the smaller party, their independence would be threatened. Ultimately, their attitude will be determined by their performance at the ballot box. If they really struggle to win votes, it is possible that Lib Dems will use a pact as a means to survive. However, if they prosper in contests such as Oldham and Saddleworth, a formal arrangement will be unnecessary.

This underlines a key contradiction, which makes a pact difficult. If the Liberal Democrats perform well, they will want to exploit their independence. If the Lib Dems collapse, their value to the Tories will be diminished.

How does Labour fit into this? Superficially, the party should fear a Conservative Lib Dem Alliance. Added together the Tory and Lib Dem constituency vote often exceeds Labours. The Tories make the assumption that a pact would enable these votes to combine efficiently to defeat Labour MPs. But that is a big assumption, with little evidence to support it.

The possible electoral benefits of a formal pact could be outweighed by the political risks. Taking a â€œLib Dem, Conservative Allianceâ€ into an election campaign could make keeping the Euro together look trivial. David Davis and Charles Kennedy will not sing from the same hymn sheet. It is hugely risky for both parties and may backfire leaving a mess from which neither will recover.

The sheer fact that the Tories are even considering a formal pact is flattering to Labour. It is a tacit admission that they doubt they can win alone. Taking a long view, it is utterly remarkable that the once great Conservative Party is considering it at all. Can you imagine Thatcher relying on the Liberals? â€œNo, No, No.â€

So will a pact happen? Probably not. Should Labour fear it? Absolutely not. Over to youâ€¦

Jonathan, a Labour activist from West Sussex, writes a column here every Sunday