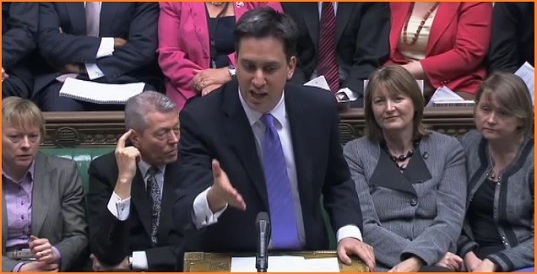 Much has been made of Ed Milibandâ€™s decision making and lack of media coverage since becoming Leader of the Labour Party. Eyebrows were raised over the roles allocated to Alan Johnson and Phil Woolas; Johnson has made it clear there are differences of opinion on policy within the opposition, while the Woolas court case raised the issue of party unity. All the while Ed has been out of the spotlight offering few soundbites on any issue, and has been the subject of criticism as a result.

The coalition announced their cuts and Miliband was critical without detailing an alternative plan. David Cameron raged at a recent PMQs â€œhe has no plan for the economy, no plan for the debt and no plan for the mess Labour made-absolutely nothing worthwhile to sayâ€,and later â€œWe know what he is againstâ€¦ what on earth is he for?â€

Yet, since then, Labour has taken the lead in all bar one of the polls, having been 3% behind the Conservatives on Oct 24th. Had he outlined policies and Labour polled poorly he would have been slated. Had he done nothing and Labour failed to make ground on the Coalition, ditto. He did nothing and his party is ahead, six months after a crushing election defeat.

Could it be the case that tactically it makes no sense for Miliband to nail his colours to the mast on policies his party are not 100% on, so long as the Conservatives are behind them in the polls? Why not let public reaction to the cuts do his job for him for the time being?

There are 4 Â½ years until the next election. Perhaps Miliband has decided to treat calls from across the house to commit on policy as an opening batsman treats a tempting delivery outside off stump; best ignored until he has stabilised his teams position. There will be plenty of time for counter attacks between now and 2015.

The Tories took a hit early in 2010 when they felt the need to be policy specific in opposition, while Labours weapon of choice against the Lib Dems is to highlight pledges made pre GE which they have been unable to fulfill. The Coalition would relish the opportunity to appear in the media picking holes in Labour’s deficit reduction plan; in the absence of such a plan, those appearances are spent announcing huge cuts to public services, while Miliband either points out the unfairness of the cut or says nothing.

Sometimes nothing can be a real cool hand.