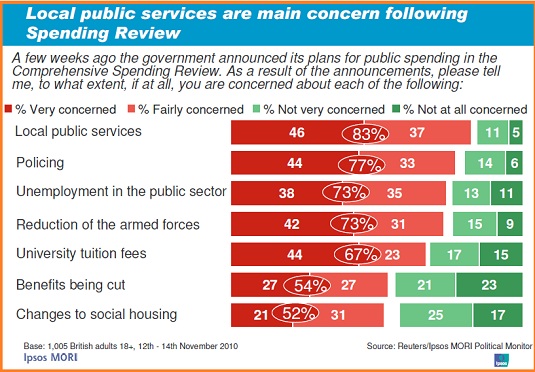 HenryG looks at where the political battle-grounds will be

Over the years I’ve noticed that one of the biggest misconceptions the public have is that their council services are funded almost entirely by the council tax they pay. In good times this isn’t so much of a problem, but it will be the cause of a major headache for the coalition too. The realisation that government spending cuts at Westmininster will hit their council’s services is starting to emerge as a real shock to many voters and will get worse. Athough there are estimates of 25% cuts to council budgets, my own council is expecting cuts of up to 40% once additional lost grants are factored in. There will be few who are left unaffected.

The recent Ispos Mori Poll shows that 83% of the public are concerned about the impact of the Comprehensive Spending Review on ‘local public services’. Anecdotally I sense that many people feel ‘I’m paying enough council tax’ to fund their services. This will be the territory in which the May local elections are fought.

Very soon we will see all manner of existing services, projects and facilities at risk as local authorities focus on what they’re legally obliged to fund. The realisation that councils are not required to fund streetlighting is one surprising case in point. According to Newsnight report a substantial number of authorities aready have plans to limit streetlighting at night which is provoking a hostile response from residents.

As the Newsnight clip shows, it won’t just be Labour councillors pointing the finger of blame at the Government cuts. National Government rhetoric will be compared with the local reality and it will soon ring hollow. Leisure centres will be sold off or closed in the run up to the year the UK hosts the Olympics. Voluntary sector grant cuts will undermine the ‘Big Society’ before it’s taken off. I know of one soup kitchen that will struggle to make it through Christmas.

Expect to see a raft of protests in the coming months. They won’t get the national headlines like the students a Millbank, but every local paper will be covering them. The pictures won’t be pierced anarchists but instead pensioners, disabled groups and the organised middle classes.

There will be enormous political challenges for all politicians. It’s straight forward for Labour councillors and Labour MPs who will be able to point to ‘callous ConDem cuts’. But how will Conservative or Liberal Democrat MPs respond when asked to sign petitions to defend services and oppose closures from their local council? Will blaming their predecessors be sufficient? I’m not so sure.

There’s potential for many local splits and strained political relationships too. Some Conservative or Lib Dem MPs with small majorities could be tempted to turn on their council rather than blame their Chancellor. Don’t expect council leaders to keep quiet. Many councillors come into politics to serve their community not close services, so expect to see a raft of defections and possiby a rise in independents standing too.

It’s shouldn’t be student fees or caps to housing benefit caps that keep Government Ministers up at night. The loss of bread and butter council services which the public thinks it’s already funding through high council taxes will cause the most discomfort. Together it’ll make a lethal cocktail and ensure electrify these May elections.