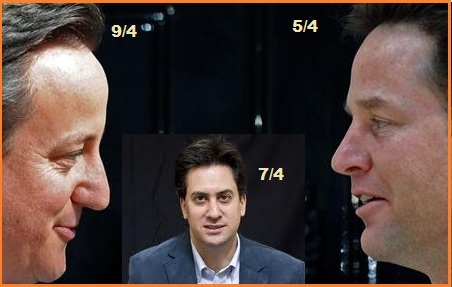 Are any of these bets tempting?

William Hills have revived a market that proved popular, and for me profitable, in the run-up to the general election – which leader will be the first to leave his job.

Interestingly Clegg was the 5/4 favourite in December 2007 when Hills last put this market up – Brown was at 9/4.

Clearly with the polls as they are Clegg is the favourite though my sense is that he’s safe at least until the next election or the break-up of the coalition whichever happens earlier. Almost all the strong figures in the party are in the government though Tim Farron, who is currently running for president, might just be dangerous.

Labour does not have a history as being ruthless with failing leaders as the other two. Also the party’s rules make a challenge markedly more difficult. It’s hard to see EdM going this side of the election.

Which brings us to Dave. The photographer incident will be added to the list of demeanours that he’s deemed to have committed by the Monty Headbangers. You could see a situation of him being if the Tories thought that this was the only way to stop Labour returning.

But Cameron has all the levers of being PM at his disposal. He’s pretty smart politically though sometimes I think he overestimates his own abilities – like his approach to the debates.

So overall I can’t see a good bet.