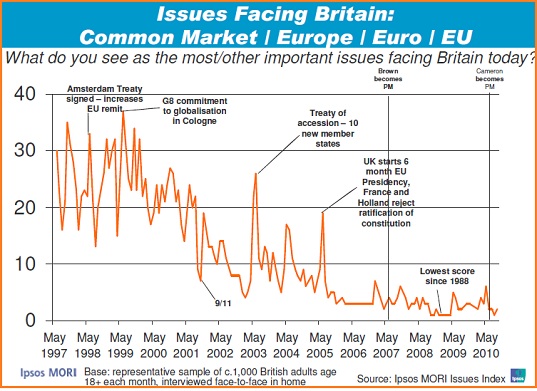 Or will the Tories of yesteryear emerge again?

Every month for more than thirty years Ipsos-MORI has asked the same two part-question question in the same standard way which, almost uniquely, is totally unprompted. The pollster asks “What do you see as the most important/other important issues face Britain today”.

As you’d expect the economy, race relations and immigration, unemployment and crime figure high as you can see here.

But there’s one issue that’s been sharply on the decline – Europe/the EU/the Euro – and on the last occasion this was asked those rating this as the “most important” simply didn’t register. The total was not even enough to make one percent. It did get a score of 4% when respondents were asked to name “other issues”.

This polling is something I refer to from time to time whenever the EU is in the news and there’s hugely a heap of abuse poured on me for daring to raise it.

But the hard fact is that the vast majority of the public don’t give a monkey’s – they simply couldn’t care less. The EU has been totally part of our lives since a Conservative government courageously took us in 37 years ago and we’ve got used to it

The idea of Britain joining the Euro has been side-lined and even when the Lisbon treaty was making all the headlines a couple of years ago the MORI figures were very low as can be seen from the chart.

So I always get amused when I see the Westminster village getting into such a state of excitement over it.

Of course Cameron like Brown/Blair and Major before him make compromises. That’s the nature of the beast but it’s not something that most voters really get worked up about.