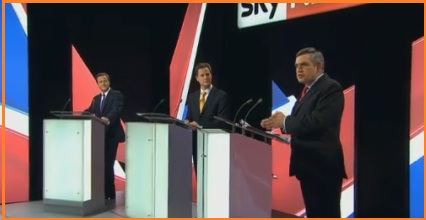 Without them could Labour have held on?

As part of the ongoing row over Tory election tactics the observations of party campaign chief, George Osborne, have been made public.

These are due to be published shortly in Dennis Kavanagh’s and Philip Cowley’s big academic study – British General Election of 2010.

They write: “In an implied admission that the media attention on the debates â€“ preparations, build-up and post-debate analysis â€“ squeezed the amount of discussion of policies a senior Conservative admitted: â€˜We were quite happy with the coverage, thank you very much. Without the coverage of the debates and the process weâ€™d have had days of Labour exploiting the votersâ€™ fears of us.â€™

George Osborne thought the media interest on process protected his party â€˜from weeks of heavy Labour pounding over issues like tax creditsâ€™. Labour strategists, aware of this, were frustrated. Osborne had been stung by the success of Labour tactics in the 2001 and 2005 elections when they had exploited votersâ€™ fears of Conservative â€˜cutsâ€™. This time, â€˜we killed off Brownâ€™s tax and spend lineâ€™, he saidâ€.

I think that there’s a lot in this. Labour really had the BIG MO throughout Q1 2010 and in all but two of the 55 YouGov polls from January to mid-April 2010 the pollster had Labour in the 30s – after the debates the red team didn’t touch 30 again and finished on 29.7%.

It was a similar story from ICM. In all but one poll from February until the week the debates started Labour was in the 30s. The Labour attacks on the Tories were getting through.

Then, from about April 11th everything was focussed on the debate build-ups, the events themselves, and then the aftermath. It was only after the final debate with a week to go that Labour and Gordon Brown started to find their voices. The campaign over tax credits, in particular, started to hit home.

Montgomerie and Ashcroft blame Cameron for doing the debates. But was Labour the big loser? Could Gordon still be PM if he’d not agreed to the debates?