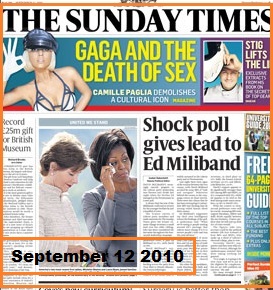 The Press Association is reporting the following:

The Labour leadership contest remains too close to call with one poll suggesting Ed Miliband could snatch victory by a narrow margin.

A survey of Labour members and trade unionists by YouGov for the Sunday Times showed bookies’ favourite David Miliband enjoying a narrow lead on first preferences.

But the pollster calculated that once lower-ranking candidates were eliminated and their second choices redistributed the younger of the two brothers would prevail…..

But although the YouGov poll gave David M 36% to 32% lead on first preferences, YouGov suggested that could be converted to a 51% to 49% win for his brother by the final round. The poll put Andy Burnham in third place with 12%, Ed Balls fourth on 11% and backbencher Diane Abbott trailing on nine…..”

UPDATE: My understanding, based on info from one of the campaigns, is that the MP third in the electoral college WAS included in YouGov’s 51-49 projection.