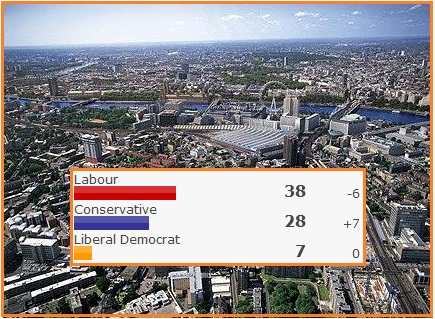 Are there lessons for next time?

Labourâ€™s relatively strong performance in London was one of the most surprising outcomes of the general election. Prior to this election, Yougov had had an excellent record of predicting election results in London, and were forecasting a swing of 5-6% in favour of the Conservatives. On the day, the swing was just 2.5%.

Overall, the outcome was not as bad for the Conservatives as it might have been. The party picked up some of its target seats, such as Harrow East, Richmond Park, and Hendon, on swings that were well above average. In addition, they won 11 councils, and 727 council seats in the local elections, despite finishing 2% behind Labour, compared to 8 councils, and 665 seats in 2002, when they finished 1% ahead of Labour. That implies that the party was able to hold on to support in a number of key marginal wards. Nevertheless, the Conservatives could easily have won another seven or eight London constituencies, had the swing in the Capital matched the swing across the Country as a whole.

One assumption is that ethnic minority voters turned out in unprecedented numbers for Labour, and this was just not picked up by conventional polling techniques. On reflection, I consider this unlikely. Labour certainly picked up huge support among ethnic minority voters in Newham, and Hackney, but at the same time, some of the biggest swings to the Conservatives came in seats like Ealing Southall, and Harrow East and West, which have very big Asian populations, and where there are Asian Conservative councillors.

This is clear too, at ward level. According to David Boothroyd, if one compares the Mayoral election of 2008 (a very racially polarised contest) with Mayâ€™s local elections, then some of the biggest swings to the Conservatives were in Ealing Southall, and Bethnal Green and Bow. Conversely, some of the biggest swings to Labour were in white working class wards in Barking & Dagenham, Havering, Greenwich, and Bermondsey.

In my view, it is the (mostly white) suburbs that are the key to the Conservativesâ€™ underperformance in London. Taking the period 2001-10 as a whole, there has been a big swing to the Conservatives across London, of 7.5%, in line with the swing across the country as a whole. However, between 1992, and 2001, Labour did substantially better in London than they did across the country as a whole, and nowhere did they do better than in the Suburbs.

Seats that would never have been considered remotely in danger, such as Finchley & Golders Green, Enfield Southgate, and Harrow East and West were lost on huge swings, as middle class voters switched to Labour in droves. Even very safe Conservative seats, such as Ruislip, Croydon South, Old Bexley & Sidcup, and Beckenham, saw enormous swings to Labour. In most cases, such seats saw further small swings to Labour, in 2001, as voters rewarded Labour for the performance of the economy in their first term.

The Conservatives havenâ€™t come close to making good their underperformance in Suburban London in the 1990s, even though they have regained some ground. There is a general trend, in the United Kingdom, and other Western countries, for urban middle class voters to move leftwards, even as other sections of the population move rightwards. Not only are many such voters employed in the public sector, but the benefits of public spending are much more visible in big cities than they are in small towns and rural areas, where people see themselves as getting very little back in return for their taxes.

This doesnâ€™t explain, however, why Yougovâ€™s London polling was so inaccurate. The urban middle classes should be one of the easiest sections of the population to poll accurately.