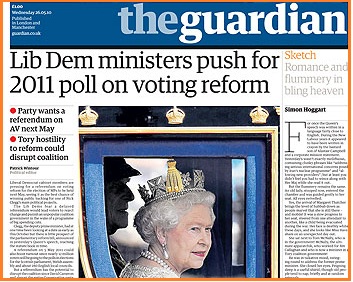 “Dyed In Some Wool” puts the case for voting NO

When considering the upcoming referendum, AV seems to me not only to be the wrong answer, but the referendum itself is the wrong question. Let’s look at the main reasons for considering a yes vote.

I want a more proportional system
AV is not proportional and will not lead to parliament reflecting the national vote, most seats contested at the 2010 election would remain in the same hands. AV will create a handful of additional marginals on which the parties will concentrate campaigning efforts to the detriment of other areas of the UK. Will democracy be better served by parties campaigning locally on ‘How To Ensure xxxx Does Not Get In?’ The right answer offers a proportional system, AV is not the right answer.

My vote is a wasted vote
Under AV, anyone will have the ability to state secondary preferences, but if the party or candidate you wish to win does not secure 50% of the vote, then your vote is wasted in any case, if your secondary choice also fails to win then again your vote remains wasted. In a constituency system, clustering of party support will always tend towards supporters of an unpopular party locally feeling their vote is wasted. However, we have not been given the option to rebase our democracy away from the constituency based to a proportional system that would properly address the notion of a wasted vote. The right answer addresses the perceived waste of votes, AV is not a comprehensive, or the correct, answer.

I hate the notion of the safe seat/I want to punish the individual MP
AV will not address this problem. The safest seats in the country will remain safe under AV as the main party will secure over 50% of the vote making the alternative votes unecessary. The very problem stated as a reason to vote for this change will remain as is under the new system. There are more effective ways to deal with a problem MP in a safe seat, the open primary being but one example which would erode the apparant safety of party selection and thus prevent bed blockers or expense cheats prospering. The right answer addresses the problem, AV is not the right answer.

It is a step in the right direction
We should be wary here. If the referendum passes, the yes supporters will have nailed their colours to the mast and it is unlikely a further change to the system will be offered (and indeed should not be) until the electorate has seen and experienced AV for a few elections. Therefore a yes vote from those who wish to go further will likely delay the possibility of this. This also goes to the very heart of the matter, are we unhappy with our political system and if so, what change do we want? We are being offered a solitary answer to a question we have not been consulted over.

I suggest that the vote must be no. I would amend the referendum to state ‘do you wish to retain FPTP?’ and if no is victorious, spend the following 4 years consulting on the sort of features we want, offering, at the next general election, a series of options in a referendum. The very least we deserve is that the right question is asked.