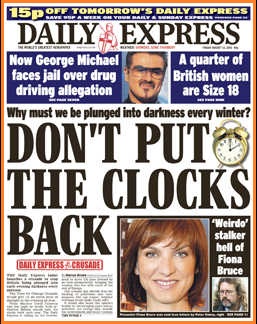 How will Scotland react in the run-up to next year’s elections?

Several of the papers are giving coverage on this August morning to the PM’s backing to moving the clocks forward an hour throughout the year so people can enjoy longer evenings.

There would be two options – to switch to the time zone which is almost standard throughout the EU – an hour ahead – with the clocks changing as usual in April and October or for there to be permanent summertime. In the past there has been strong opposition from Scotland where they would find that for parts of the year children would be going to school in the dark.

A flavour of the debate to come came in the response of the the Western Isles SNP MP, Angus MacNeil. According to the Mail he said that said that English people should just get up an hour earlier if they wanted longer days.

He said, “…David Cameron needs to wake up to the impact these proposals would have on people in Scotland. Plunging Dundee into darkness to boost tourism in Torquay is simply not acceptable and would make a mockery of Mr Cameronâ€™s Respect Agenda.”

This is one of those issues on which people can feel very strongly – and the Telegraph says its one of the “longest-running and most contentious debates in British politics”.

Dave, though, has specifically rejected any idea of having different time zones in the UK. The timing, if that’s the right word, is interesting given that next May there are the elections to the Scottish parliament.

Would a fight with Cameron on this give a boost to the SNP in this critical period and how are the coalition’s Scottish Lib Dem MPs, particularly those representing seats in the far north, going to react?

The Express is giving the plan its backing by launching what it calls its “Time for Change Crusade”. A Tory back-bencher has tabled a bill on the issue.

Is it going to happen – it might be worth a betting market.