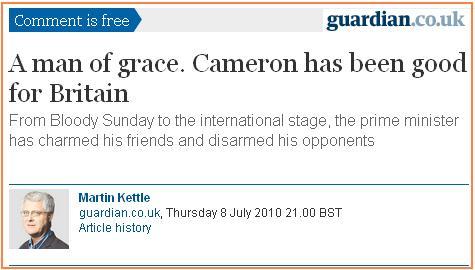 According to PoliticsHome the political piece that’s getting most attention at the moment is Martin Kettle’s Guardian column in which he lavishes much praise on Cameron.

It should be said that his views are not being universally welcomed by those Guardian loyalists who have responded.

This is Kettle’s closing point:

“These are still very early days. The coalition has to get through difficult votes on AV and negotiate the most difficult spending round in a generation. The economy may tank. Yet in these first weeks even opponents should concede that Cameron has played a blinder. He is showing himself as potentially the best all-round prime minister of the modern era. Labour’s hopefuls should learn from him. No doubt about it, Cameron wins this season’s political golden boot.“

Even the most ardent Cameron loyalist, I would suggest, would regard this as a bit premature.