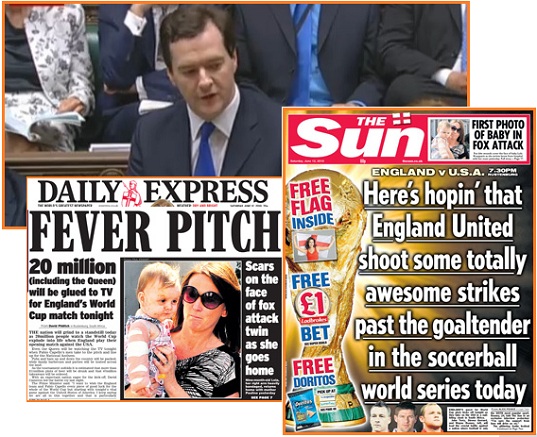 Is Osborne playing double-or-nothing on England?

New Labour, when it was new, had its Grid: a careful plan of big national and international events around which those running the party would schedule their own campaign launches, policy announcements, events and so on. It worked very well at the time though it did help that it had a largely friendly media and opponents who were outclassed on that score and, for that matter, that Labour was in opposition (itâ€™s always harder in government).

In less than two weeks, George Osborne will become the first Conservative to deliver a Budget for over 13 years and will almost certainly announce or confirm tax rises and spending cuts, taken as a whole. The following afternoon Englandâ€™s final group game will kick off.

There is an element of coincidence to this. The current government didnâ€™t decide when the World Cup would start or end, whether England would qualify and when the election would be. That the election was in May meant that any emergency budget would have to be during the World Cup – it would really be rushing things to deliver it beforehand and to do so afterwards would be running into the Summer Recess.

Even so, the back-end of June will be a good time to bury bad news – providing that England are still in the tournament. This to me is Osborneâ€™s big political gamble: if England go out on June 23, it could multiply the negative impact of the budget rather than overshadow it (the response may be different outside England).

If the timing has been planned according to Grid principles, itâ€™s quite cute. To have scheduled it on the same day would have looked like an obvious attempt to hit the public while their attention was distracted whereas to do it the day before allows for some analysis by the media but the papers the next day – and especially the populist ones – are still likely to be dominated by World Cup build-up.

Whatâ€™s more, if England do qualify for the second round, their match will be on the following weekend, nicely occupying the Sundaysâ€™ attention.

By contrast, failure, were it to come, would compound the negative stories of the economy,Â taxes and spending.Â Englandâ€™s exit from the 1970 World Cup has been blamed for Wilsonâ€™s defeat at the polls shortly afterwards. That almost certainly overstates the significance of the event (the trade figures were more damaging to Labour), but the feel-good factor is affected by sporting success.

Of course, unlike Wilson in 1970, the government now has almost five years to shake off a World Cup defeat (should there be one). In fact, thereâ€™ll probably be another World Cup before the election. Still, itâ€™s not impossible that should things go wrong in South Africa it could put a dent in the coalitionâ€™s ratings for the time being.