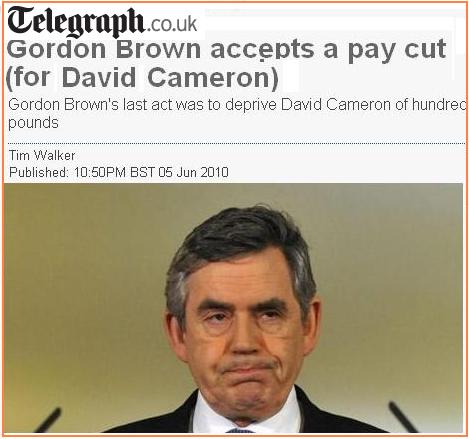 The Telegraph has a story that I’m sure will be referred to time and time again when historians come to assess the Brown years.

The report goes “…one of Brown’s final acts in the Downing Street bunker was quietly to organise a pay cut for his successor which he must have known would leave him out of pocket to the tune of hundreds of thousands of pounds…On Brown’s orders, the Prime Minister’s remuneration package was cut from Â£194,000 to Â£150,000, but this was done with such stealth that no formal announcement was ever made..”

The trouble for the former PM is that this is so telling. It’s a bit like those Clinton staffers who took the W off their White House keyboards just before the arrival of George Bush.

Like Liam Byrne’s famous handover note, I suppose, it probably seemed a good idea at the time.