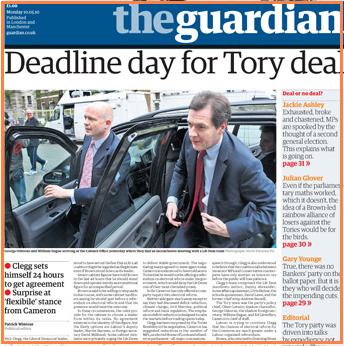 All the signs are that the Tory talks with the Lib Dems on a possible agreement following the election are coming to a resolution with a meeting of the new Conservative parliamentary party this evening being one of the final hurdles.

It’s hard to see Tory MPs, more than half of whom are new, not backing Cameron though it might not be as smooth a ride as the leadership would have hoped.

The prospect of power, even if that is partly shared with the Lib Dems, should be enough to dampen any serious opposition.

At the moment we know very little of what’s taken place in the weekend discussions and the fact that there have been no leaks is telling. My guess is that the package will contain elements that both the blues and yellows will find hard to swallow but at the end of the day both sides will agree.

Much has been written, some of it off-beam, about the relationship between the Lib Dems and Labour with supporters of the latter simply not grasping how their party is viewed. Thus the way that Labour figures simply add the Lib Dem vote share to theirs and then claim some dubious authority over it is resented enormously – but they don’t get it.

I think that Julian Glover has this right in the Guardian this morning. “..The Lib Dems are an anti-Labour party as much as they are an anti-Tory one. They feel no duty to act as Gordon’s little helpers, a reserve fuel tank of votes to get his government over the line. They know it was rejected at the election, even if Labour’s resilience in many seats suggests the party is sleeping, not dead. They know Cameron will have to become prime minister. They loathe Brown’s assumption that Clegg will come to him as a supplicant. If Labour had wanted to do a deal with the Lib Dems â€“ and lots of Labour MPs don’t â€“ it should have replaced Brown with David Miliband before the election…”

Which neatly brings us to the next big political story – the future of Mr. Brown and a possible leadership contest.

Amongst the list of names being mentioned I have not seen the chancellor, Alistair Darling. He, surely, has shown that he’s got the right qualities to steer Labour through what could be a tricky post-election period. He towers above his colleagues.

Darling was the choice of the late Indy on Sunday columnist, Alan Watkins, who sadly died during the weekend.