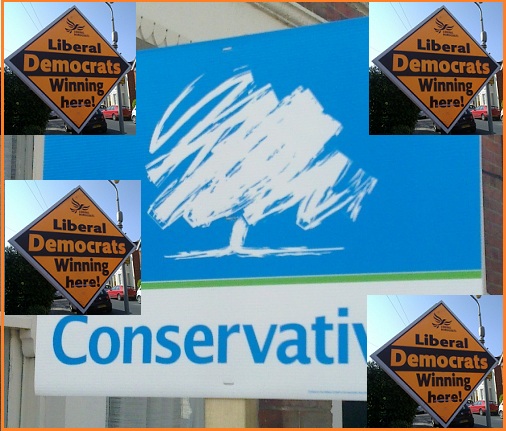 Or is it too big a step for their parties to swallow?

What a day Saturday was and, no doubt, it will continue throughout Sunday.

Are the leaderships of both the Tories and Lib Dem going to be able to sell a deal to their parties that appears to run so much against the grain of both?

For the very notion of a blue-yellow “common plan” as is it is now being called seems so alien to many in the parties that, on the face of it, there’s no way. But could it just come about?

If cabinet posts really are on offer to the Lib Dems then that’s going to be very hard to turn down even if whatever words they come up with on electoral reform falls short of what the yellows want.

And how would voters react if Clegg’s party turned down such an offer and what we get instead is a coalition of the losers with Mr. Brown still at Number 10?

And how is the blue team going to react to such an arrangement – especially as many are pretty sore at their leadership for not clinching the deal properly last Thursday?

True there are a lot of big hurdles to surmount – but my sense is that this is going to happen and that’s where my money is.