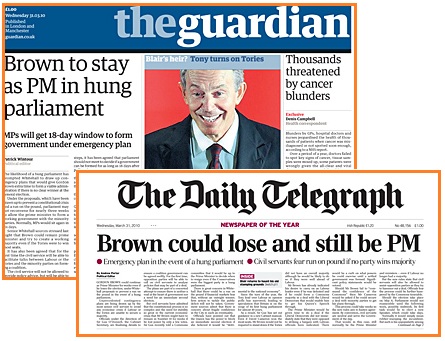 Could opinion harden against a hung parliament?

Both the Guardian and Telegraph lead on a civil service plan that would have Mr. Brown remaining at Number 10 in the case of a hung parliament.

As the Guardian puts it: “Under the proposals, which have been drawn up to prevent a constitutional crisis and a run on the pound, parliament may not reconvene for nearly three weeks to allow the prime minister to form a working government with the minority parties. Normally, MPs would sit again in six days..Senior Whitehall sources stressed tonight that Brown could remain prime minister and try to create a working majority even if the Tories were to win most seats.”

Without getting into detail of the constitutional niceties isn’t this going to add to what’s been called the “Hung Parliament paradox” – the more it seems likely the less likely it is to happen?

For the experience of 1992, when the polls had the parties neck and and neck, was a hardening of the Tory vote that gave John Major another five years as PM.

Then, of course, it was the incumbent government that benefited maybe because Major was enjoying a significant lead in the approval ratings over Kinnock. This time could it be the opposition? It might for as we’ve highlighted in recent weeks Mr. Brown still has huge negative approval numbers.

Both YouGov and Ipsos-MORI have this in the low 60s.

The only occasion when a PM won an election with negative numbers like that was Tony Blair in 2005 – but he was facing an opposition leader who was even more unpopular. Currently YouGov have Cameron with a net ten point positive while MORI have this at even.

The Ladbrokes Tory majority price has tightened to 8/13 while NOM is at 13/8. Other bookies are in the same area.