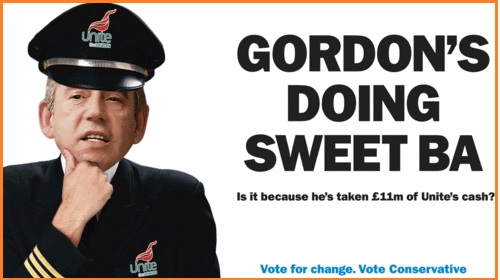 Doesn’t the uniform make him look better than he is?

Launched this morning is the latest Tory poster which seeks to link Brown with UNITE with the BA strike.

Politically it’s clearly the right thing to do – but has the party made a cock-up in the way it’s executed.

To my mind the cap and the uniform and the UNITE logo appear pretty smart and really make Brown look quite good.

The idea of Brown as “captain of the nation” as it tackles difficult conditions is one, surely, that Labour HQ won’t be concerned about.

It’s this portrayal where you look first and I wonder whether the core message gets lost.

I rate this as a Tory own goal.