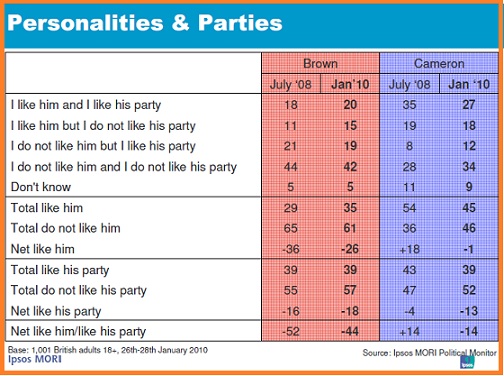 This has just come out from Ipsos-MORI – a polling question that I quite like and have featured before.

The last time this was put was in July 2008 which was just about the biggest low for Brown when all the talk was of Miliband (D) launching a coup to oust him. The poll took place just after Labour lost Glasgow East.

You can play about with the numbers as you wish – and no doubt people will draw the conclusions that they want to draw.

It’s clear that in the past eighteen months Brown’s position has got better and Cameron’s has declined. But there’s still a large likeability gap.

What does it mean in electoral terms? We shall have to wait and see?