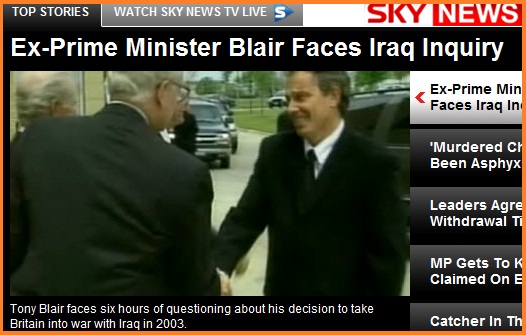 Could this be a dangerous day for Mr. Brown?

Getting on for seven years after he took that momentous decision Tony Blair will be quizzed in public for six hours today about what has become the defining policy of his administration – the invasion of Iraq in March 2003.

We’ve had a taster already, from Alastair Campbell earlier in the month, of the approach the ex-PM is likely to take and we’ll be exposed again to that hugely capable communicator who has everything in this department that his successor lacks.

In sharp contrast to Mr. Brown who when in a corner unconvincingly denies the blindingly obvious Tony will try to make a compelling case and the tougher it gets the more effective he can appear.

Who can forgot the so called “masochism strategy” in 2003 when he undertook TV grillings from audiences who were totally hostile to his position.

But what’s this going to mean to the general election? How is Tony going to respond when the inevitable questions about what Brown knew and did come up?

My guess is that he’ll be a lot more elegant than Campbell was but there will be no attempt to insulate the man who was the chancellor at the time and who spent all those years plotting to get rid of him. It was Brown, of course, who signed the cheques.

At the very minimum this will be another news cycle that will be taken up with issues that are not going to help Labour.

What a lucky politician David Cameron is – Labour ousted the one leader who was capable of beating him and we’ll have another day when his plans and ideas are not being subject to scrutiny.