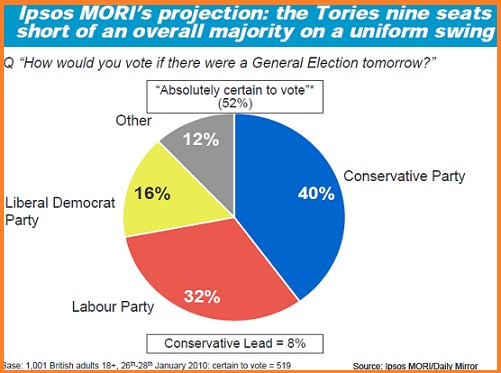 There’s another huge swing in the MORI poll for January that has just been published. This was carried out last weekend but is only being published tonight for tomorrow’s Daily Mirror.

These are are figures for the last four MORI polls

So if Angus Reid are seen as the totally stable pollster with hardly any variations at all then Ipsos-MORI is the opposite.

The fieldwork took place from Tuesday to Thursday. Certainly it shows a very different picture and will keep the hung parliament narrative going.

What seems to happen is that the Lib Dem share seems to be crucial. When that goes down Labour goes up.

MORI is the only pollster that does not embrace some measures to ensure a politically balanced sample. It also only shows those 100% certain to vote in its headline figures.

So there you are folks – the incredibly turbulent MORI or the boringly stable Angus Reid.