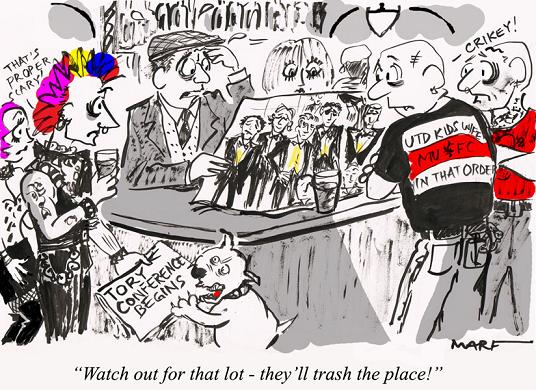 Could the Bullingdon attacks still have potency?

In her first Conservative Conference week drawing PB’s cartoonist, Marf, touches on an area of potential vulnerability that Andrew Marr sought to bring up in his BBC1 interview with David Cameron yesterday – the perception that the leadership are “toffs” who who don’t really understand so called “ordinary people”.

From some of the rhetoric in Brighton last week we can deduce that Labour is toying with how best to use this aspect of the backgrounds of Cameron and some of his colleagues. I was quite surprised during my couple of days at the conference how often this was raised. The question is will it work?

We saw the campaign that Labour ran in their failed defence of Crewe & Nantwich in May 2008 and the assumption then was that that result, the first Labour by-election loss to the Tories in twenty six years, would be the end of such thinking.

The issue, of course, is that bashing toffs is popular with sections of the Labour activist base and the party needs something to motivate the troops. The down-side, as we saw in C&N, is that it also sends out a message about those who deploy it and you can end up with turn-out increasing on the other side as well.

For so much of campaigning is not about getting people to switch allegiance but simply to get your own side out to vote – and Labour generally finds this more challenging than the other parties.

My guess is that we’ll see the famous Bullingdon pictures rolled out again at the start of the formal general election campaign but then events will simply move on.