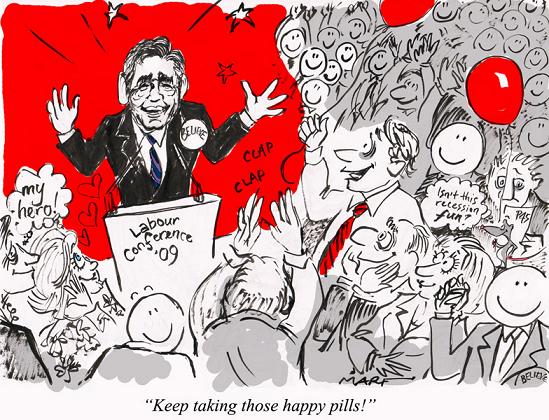 Meanwhile we now have the YouGov post speech poll – the first figure is after the speech – the second is before it.

It should be noted that the sample was simply people who watched the speech – it was not demographically or politically weighted and as Anthony Wells at UKPollingReport observes “People who watched his speech are likely to be a lot more politically aware, a lot more well disposed towards Labour to start with (I suspect youâ€™re more likely to watch the speech of a party you like), and hence probably more receptive to Brownâ€™s message.”

So the following is just about meaningless as a test of representative opinion.

These are not numbers to use to try to forecast the general election. We’ve seen it in the post-debate poll in the US elections – first reactions rarely tell us anything.

It will be the same next week with Cameron speech. Wait for the mid-October voting intention number – everything else is fluff.