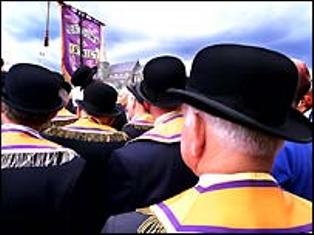 How could the province impact on the general election?

As todayâ€™s July 12, it seems an appropriate time to cast an eye across the Irish Sea for a look at recent developments in Northern Irish politics. After all, the votes of Ulster MPâ€™s have been critical in the past, from Callaghanâ€™s lost motion of No Confidence to Majorâ€™s minority government becoming dependent on votes of minor parties to win votes. If the Conservatives fail to win the 120 or so seats needed to gain an overall majority, weâ€™ll be back in a similar situation.

The 2005 general election was a triumph for Ian Paisley and the DUP. More than three decades after he split to previously monolithic unionist block, the DUP didnâ€™t just replace the UUP as the dominant unionist party but annihilated their parliamentary representation, winning nine seats to the UUPâ€™s one.

It wasnâ€™t the first time the DUP had gained a victory – Paisley always topped the poll in the European elections – but that was in no small part due to a significant personal vote. The DUP also topped the Northern Ireland Assembly elections in 2003, before consolidating that with a more emphatic election win in 2007.

However, 2005-7 may have been the zenith of the DUPâ€™s achievements. While the UUP had all sorts of internal arguments over the years, the DUP has largely been content to follow the lead of the Big Man. No longer. After 35 years, the octogenarian Paisley stood down as leader in 2008, to be replaced by the less charismatic Peter Robinson.

An even bigger problem for the DUP may be the formation of Traditional Unionist Voice, which split from the DUP in opposition to the St Andrewâ€™s agreement and mandatory power sharing. There is a certain irony here as it was an oppositionist stance to power-sharing that proved again and again the core support of the DUP; they could now be undone by switching to the opposite side of the same argument.

Although the TUV lost their MEP in June and trailed in fifth, the seat had only been theirs by defection, as party leader Jim Allister had been elected as Paisleyâ€™s successor for the DUP. More significantly, while the other major parties all polled within 0.5% of their 2004 share, the DUP dropped from 31.9% to 18.1% (which mirrors almost exactly TUVâ€™s 13.5% share), allowing Sinn Fein to top a Northern Ireland poll for the first time in the process.

Itâ€™s difficult to translate those results to a general election, where frequently not all parties contest all seats in the province. However, it doesnâ€™t seem unreasonable to suggest that if the schism canâ€™t be repaired, the DUP will do extremely well to hold onto their nine seats.

On the other side of the unionist equation, the UUP have been making friends, allying with the Conservative Party under the banner of Ulster Conservatives and Unionists – New Force (making for the awful acronym of UCUNF, combining something that looks and sounds like a naughty word with the politically dodgy suffix of â€˜NFâ€™).

Unfortunately, the partyâ€™s one MP, Sylvia Hermon, opposes the alliance and the situation in her own seat is now even more confused as she may stand anyway, although under what flag remains unclear. As itâ€™s an alliance, not a merger (UCUNF is a registered description of both the UUP and Conservative parties), that ought not to be a problem but as names and descriptions are important symbols and nowhere more so that in Northern Ireland, it is.

Iâ€™ve not seen any constituency odds for Northern Ireland, and given the fluidity and uncertainties of the political situation there, Iâ€™m not terribly surprised. It would take a brave punter to make a call in most of the seats and a brave bookie to lay oddsÂ (though I expect Sinn Feinâ€™s share in Belfast West to again be amongst the highest for any party in any constituency).