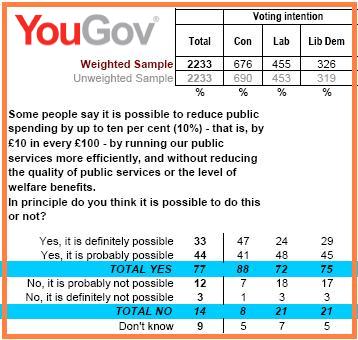 What does he do now in the face of these numbers?

Thanks to Andrew Sparrow in the Guardian for spotting the above numbers in the latest YouGov poll for they seem to blow a big hole in Brown’s core general election strategy – to reduce the argument down to a choice between “Labour investment” and “Tory cuts”.

The key premise of the Brown approach is that voters will believe that by curtailing budgets to key services then inevitably those services will suffer. But what if voters don’t believe it – where does Brown’s plan stand then?

So in the poll a remarkable 77% thought it was “possible to cut spending by 10% by running public services more efficiently, without reducing their quality or cutting the level of welfare spending..” against just `14% who said it wasn’t.

That seems a remarkable split and I just wonder whether this is another manifestation of public reaction to the MPs expenses scandal. Having looked at the approach those who govern us to spending public money on themselves there is even more scepticism about their ability to use our taxes efficiently.

All this seems to suggest that Brown’s approach, already under fire from many of his colleagues, is far from being the election saver that he was hoping for.

Has he got the imagination and/or flexibility to come up with something else? You wouldn’t bet on it for once he’s got an argument in his head it’s very difficult to shift it.