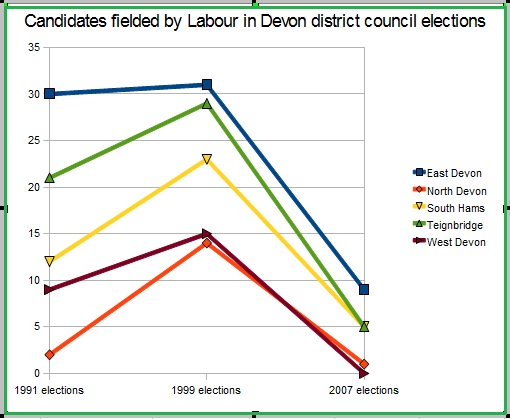 Could a big increase be good news for the blues?

When they are published we’ll get our first indicators of how Labour is approaching the coming fight and also about the current health of the party. Harriet Harman’s goal is that the red team will have more candidates for up to 30 years.

The chart above shows what’s happened in five Devon district council since 1991 and how the red team virtually ceded the role of opposing the Tories to the Lib Dems.

Having to face more Labour candidates is surely going to add to the challenge for Clegg’s party.

One of the best indicators of party organisation in an area is the number of council candidates they are able to field. Simply getting someone on the ballot is not as simple a task as it first appears.

Firstly the party machine has to find someone who meets the legal requirement who is prepared to put themselves forward. Then ten voters on the electoral roll who are ready to sign the nomination papers need to be found – and that can be quite a challenge where there’s been little recent activity. Finally, irrespective of the outcome, a full statement of expenses incurred has to be filed after the election.

In Devon the likely result of all the effort to increase the number of Labour candidates will be to help the Tories.

For in recent years all the battles have been Blue-Yellow and where there’s been no candidate Labour voters have generally gone with the Lib Dems. That’s much less likely on May 5th.