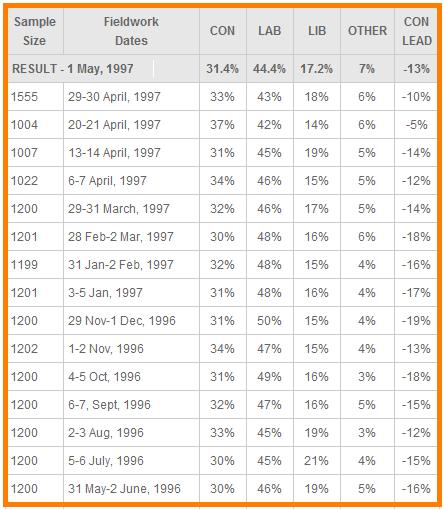 Why the only comparisons you can make are with ICM

We’ve discussed this before and will, no doubt, discuss it again because there’s a widespread belief out there that the evidence suggests that Labour will recover as we get closer to polling day.

Even last week in the FT the eminent telly historian Professor Niall Ferguson and fellow academic Glen O’Hara were comparing the Tory’s current polling shares with the 60+% shares for Labour that were seen in a number of surveys in the run-up to the 1997 election.

For what Ferguson did not mention was that the only firm with which you can make valid comparisons is ICM which has operated a consistent methodology since the mid-`1990s. The other firms that were working in that period have either radically changed their approach (MORI) or simply disappeared altogether from UK political polling (Gallup).

He did note: “The polls then probably overstated Labour support but the fact remains that the Conservatives have yet to win over the majority of voters.”

Eh? Since when has a winning party ever secured the majority of voters? Even Tony Blair’s Labour in its greatest triumph only achieved 44.4%.

The problem is that when you strip out all but ICM surveys it rather undermines the core argument in relation to polling comparisons. Ferguson does make the point that we’ve rehearsed here before about the need for a substantial Tory margin to be certain of a majority.

Now it might be that Labour will enjoy a dramatic recovery as we get closer but there’s nothing inevitable about it and it’s foolish to suggest that it is.

Just look at the numbers in the panel above and you’ll see that ICM’s numbers a year out were not that far off what actually happened.

The table does show Blair’s Labour was doing considerably better than Cameron’s Tories when you compare the run-up to 1997 with what’s happening now. But John Major’s Tories were also doing better than Labour’s current position never dropping out of the 30s between July 1996 and polling day on May 1st 1997.

The big difference between now and then was the proportion of those polled opting for one of the other parties.

UPDATE: See response from the co-author of the FT article at comment 138.