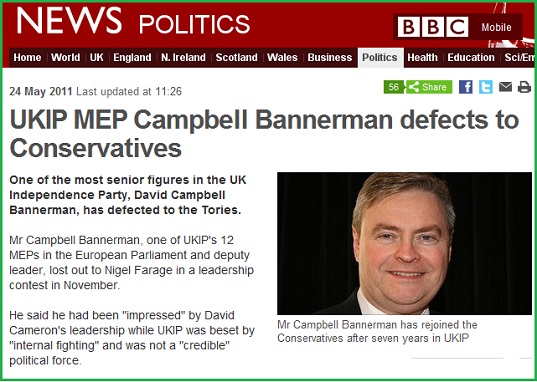 Just a fortnight after one of UKIP’s leading figures, Marta Andreasen, called on Nigel Farage to resign there’s been another blow to the party leader, Nigel Farage.

One of the party’s senior MEPs and a candidate in last autumn’s leadership election, David Campbell Bannerman, has announced that he’s defecting to the Tories.

He said: the party had become “obsessed with single issue politics, internal fighting and shouting from the sidelines…With the recent failings in domestic elections, the ditching of policies and the lack of any credible plan, UKIP has confirmed it is not a serious, credible, fully-fledged political party but merely a pressure group”

All this comes less than two years after it came second in terms of votes in the elections to the European Parliament and everything seemed to be going its way.

This could be really good news for the Tories who probably failed to win a number of seats at the general election because some support had gone to UKIP.

Standing in the wings is Viscount Christopher Monckton, a former aide to Mrs Thatcher and a leading figure in the global warming debate. His chances, if he wants to stick with the party, must have been boosted by today’s departure.

I’ve said it before but I think he’s got the communication and leadership skills to make UKIP into a serious force.

HELP SUPPORT PB AND MARF's WORK: PB is appealing to those who value the site for donations to help keep it going and to provide a facility to support Marf's work. A third of the proceeds of this appeal will go to that end. This has been prompted by a fall in display advertising revenue which in many months is not covering core costs.