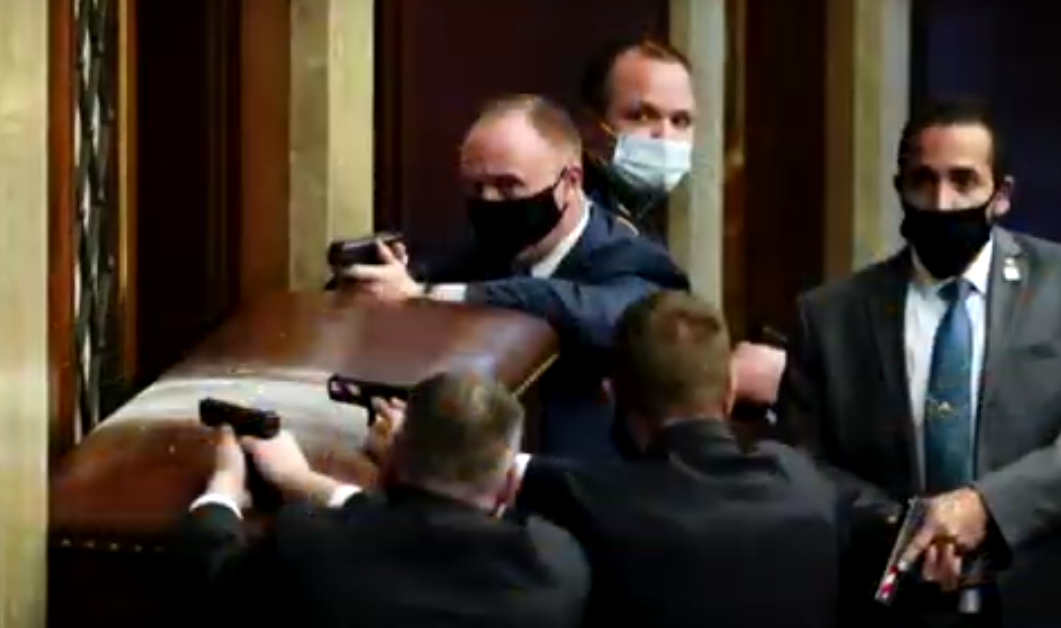 What happened today was down to him – a President who has ignored his oath of office, who has for months deliberately cast doubt on the democratic process and trust in it, who has undermined its processes, who has spread lies about the result, who has abused the legal process to try and support his lies, who has deliberately woven a myth about his election victory being stolen from him and who has urged his supporters to fight. And now that myth has its own martyr with the shooting dead of one of the female protestors. She may have made the choice to go to the Capitol. But it is the President who should be feeling shame tonight at what his words have led to.*

But not just him. Trump has not been able to do what he has done without the active support of the Republican Party. They did not simply turn a blind eye. For four years they supported him in Congress, on the airwaves, in campaigns, in what they told their voters. They did not speak truth to him. They did not speak truth to the voters. They sold whatever principles they had for a chance at power. They showed that they did not really – deep down – believe in democracy or the Constitution or what these enable: freedom under the law, security, the chance of peaceful change. They refused to understand that there is a chasm between addressing the grievances of the left-behinds and undermining the very foundations of a country’s democracy and political system. They blurred that distinction in their pursuit of power.

Trump has dishonoured America and American democracy. The Republican Party – the party of Abraham Lincoln and the Gettysburg Address – has been complicit in that dishonouring. Even the last-minute scrambling for the lifeboats by Republican politicians such as Mitch McConnell and Mike Pence – as they belatedly realised what their oaths of office meant (or more cynically tried to save their careers) – does not wash away that stain. It will not be the work of a moment for the party to relearn essential political decency, to understand that moral courage is the most important of virtues, to remember what democracy really means.

The “stolen election”, “the stab in the back” myths have been created. Even now Trump refuses to accept the truth of his defeat by the voters. There are enough voters who believe these myths, who are alienated from their system of government, who feel angry and betrayed and resentful. They will not fold up their tents and disappear – even after Trump has been prised out of the White House. It will not be the work of a moment to deal with their grievances either. They may be a minority but minorities can change countries. Ask Germany – it knows where unjustified betrayal myths can lead.

The US has always had its foundational myths: the “shining city on a hill“, the quasi-Biblical covenant between ruler and ruled, the reverence for its Constitution. Some myths help countries appeal to the better angels of their natures, are something to aspire to, whatever the grubby reality may be. One grubby reality America’s leaders now have to face is how fragile its polity is when faced with a determined, unscrupulous, amoral President and an appeasing party only interested in obtaining and holding onto power by whatever means, no matter what the price.

Nothing is now more important for America than for it to repair its democracy, to rebuild trust in it, in how it works and how it can work for America’s citizens. It is one hell of a task for President Biden and Vice-President Harris. We can only hope that they are up to it.

*(Lawyers will enjoy the spectacle of Priti Patel informing Radio 4 listeners that words have consequences, a connection she – and her supporters – ignored when it was her words complained about.)